They enter through Panama at the canal and head in both directions.

Some go south, settling in Colombia and as far south as Ecuador. Others head north to Costa Rica, Nicaragua and as far as Guatemala. They pass in small groups or alone, but when they reach their Pacific-coast destinations, they group up with others that have made the passage. The coastline of southern Costa Rica is exactly what they need to thrive.

We are not talking about people; we are talking about tarpon, an Atlantic species and popular sport fish in the southern United States, the Caribbean, and the west coast of Africa. The Caribbean side of Costa Rica is world famous for its tarpon fishery. 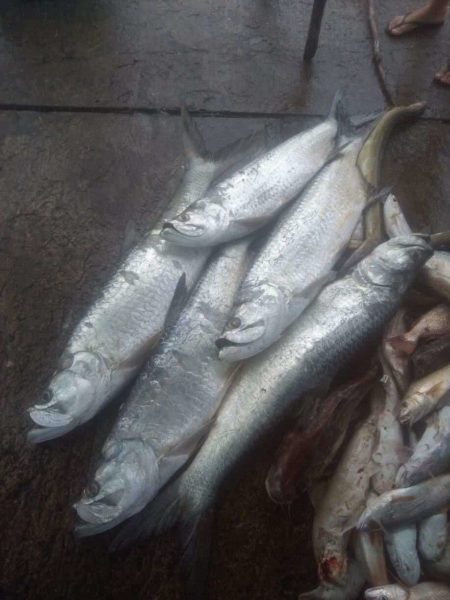 Caught in fisherman’s net near Quepos. Via Todd Staley.

The first tarpon was spotted in the locks of the Panama Canal in the late 1930’s, 25 years after the canal opened. Soon they were spotted in Panama Bay. Over the years, more and more sightings and captures have been recorded in the Eastern Tropical Pacific.

In recent years, the sightings have increased tremendously, but that could be for a variety of reasons. Maybe tarpon are now breeding in the Pacific. Although tarpon in the larvae stage have never been found in the Pacific, the capture of small juveniles suggest that they are breeding there. The chances that these little tarpon passed through the canal and migrated several hundred miles is slim.

The expansion of the canal in recent years has allowed for much bigger ships to pass as well as producing an easier passage for species that can survive the 65 km trek through freshwater lakes Gatun and Miraflores. In fact, more than 90 species of fauna and flora have been documented to have passed from one ocean to the other — either transported by ship or freely swimming across.

Social media and internet may also play a role in the increase of reported sighting of these silver bullets. Many sightings have been in rural or sparsely populated areas where before the communication to the outside word was limited.

I saw my first tarpon in Golfo Dulce in 1995 when I was casting the Rio Esquinas side of the Gulf for small snapper. A fish of nearly 100 lbs rolled and took a gulp of air right next to my boat, and I thought I had lost my mind. This is a fish I knew well from fishing for them in Florida to running Archie Field’s Rio Colorado Tarpon Lodge here in Costa Rica. But this fish was not supposed to be here.

Around 2010, we started hooking eight to 10 a season while fishing for roosterfish when I managed the fishing at Crocodile Bay in Puerto Jimenez. The first one was 37 lbs and was brought to the dock because the captain had no idea what it was. Today, almost all are released. I have seen one as large as 123 lbs. Most captures occur in our Costa Rican summer months with March and April seeming to be peak times for an accidental encounter.

One angler who seems to encounter tarpon more than most is a local fisherman named Saul Porras. By trade, he is a mate on a sportfishing boat. When he is not fishing for work, he goes fishing for fun. He has caught more than a half dozen tarpon in the Pacific, and all of them were casting off the beach while fishing for snook. The little juvenile fish he caught off the beach at Carate adds weight to the theory that tarpon are breeding in the Pacific. Porras watches for small sardines that school up near the shoreline. When they arrive, pelicans begin to dive on them. A short time later, the predators move in. He has learned by watching how the baitfish reacts to determine what type of fish is feeding on them. Jacks and roosterfish come in full-blown attack mode white water froths in the frenzy. Snook are more polite feeders and sneak in from underneath, causing smaller explosions of water.

A few weeks ago, Porras had set up near Tamales in the Golfo Dulce. The sardines started to go crazy and he saw big silver flashes breaking the water as they chased the baitfish. In short order, he was hooked up and a tarpon went immediately airborne. Catching a tarpon on light gear in a boat is an accomplishment, but off the beach even more so. To catch one in the Pacific Ocean is like winning the lottery. That day he hooked five and landed three of them. (He released them all.) He has caught them in at least two other locations also.

A study has just been released on 80 years of tarpon migration through the Panama Canal. Bernald Pacheco from INCOPESCA, the entity in charge of Costa Rica fisheries and CIMAR at the University of Costa Rica, contributed to the study, which was led by Gustavo Castellanos with the Leibiz Center for Tropical Marine Research in Germany. The study is available online here.

I truly believe there a lot more tarpon in the Pacific than most people and scientists believe. Every year, the number of sightings increases, and anytime you catch three of anything that is not native to an area in one day, they have set up camp.

Todd Staley has run fishing sport operations on both coasts of Costa Rica for over 25 years. He worked for Crocodile Bay Resort for around 17 of those 25 years.
He recently decided to take some time off to devote full-time to marine conservation and is the communications director at FECOP. Contact him at todd@fecop.org.