Crocodile Bay Resort’s Fishing Director, Todd Staley is on a six month leave helping FECOP with fishing conservation. Crocodile Bay is  a proud sponsor of the Gray Fish-Tag Roosterfish Tagging Project – We hope you enjoy this update on the project. This was the first time in history that implantable TDR tags have been deployed on roosterfish.

I have never enjoyed fishing under pressure. I prefer to fish for fun. There was a time in my life I fished a few money tournaments and even won one or two. Nowadays, if I am fishing a tournament, it’s a charity event, where the winners are generally children with illnesses.

Even when fishing a client, I like to fish with someone who was more interested in having a good time on the water rather than catching a ton of fish or a giant fish. A much better fisherman than myself who actually was just inducted into the IGFA Fishing Hall of Fame explained it very simply to me. Larry Dahlberg said, “Your chances of catching a really nice fish is directly related to how much you deserve it.”

I have noticed over the years that a good attitude catches fish and a bad attitude eats dirt. One’s relationship with the fish gods play a big part. Inexperienced anglers with good mojo have better luck than a good angler with a bad attitude. On this particular day, the pressure was on. Gray Fish-Tag research center coordinator Bill Dobbelaer and marine scientist Travis Moore were down from Ft. Lauderdale to place another archival electronic tag in a roosterfish. Usually this would be a simple task, today was different. An ominous gray sky loomed on the horizon and the breeze was much stronger than usual for an early morning. We needed a fish around 30 lbs so it could comfortably wear the device that needed to be implanted.

The event was co-sponsored by Crocodile Bay Resort and FECOP, the sport fishing advocacy and marine conservation group in Costa Rica. Crocodile Bay Resort’s crew was Oldemar Lopez and Sharlye Robles. Anglers, Christian Bolanos from Gray Taxidermy in Quepos and myself. Capt. Lopez suggested we try Matapalo Rock a popular roosterfish at the mouth of the Golfo Dulce. The overnight showers had muddied up some other popular inshore spots so it made sense. 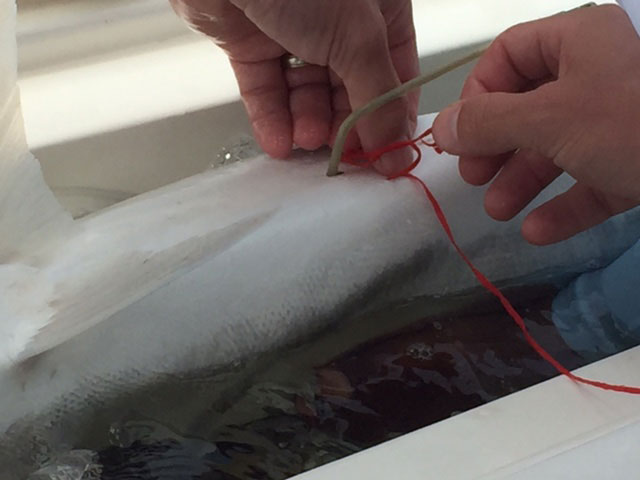 Roosterfish is the perfect choice for this kind of study. It is a strong fighting fish, popular inshore game fish and Gray Fish-Tag has already learned a lot about them from the traditional spaghetti tag. Because it is a coastal animal, a good number of tagged fish have been caught again. The spaghetti tag is inserted on the shoulder of a fish and has a serial number. The number is reported to the research center by sport fishermen who recapture the fish. With this method, the information is limited to where it was caught and what size it is. When recaptured we learn how much it has grown over the period of time between captures and how far it traveled. The electronic tag records much more information but the fish must be recaptured also. The success with spaghetti tags made it worth the bet because they cost $1500 a piece. Four have been placed first time around. One in Quepos, one in Herradura, and two in the southern zone around Golfo Dulce.

As we reached the mouth of the gulf we were hit by a wall of wind in our face. Still a half mile from Matapalo Rock we trudged on. As we finally arrived I thought about renaming the famous landmark, at least for this day, Whirlpool or Maytag. It stood like the spindle of a washing machine and the surrounding waters were in the agitate cycle. We worked a nearby pinnacle but it was almost impossible to do a decent drift over the spot. Over and over we worked the area, fishing with one hand and holding on with the other. Somehow the conversation turned to the relationship between biologists and fishermen. A lot of biologists have never fished and a lot of fishermen don’t know the difference between an otolith and an eyeball. They are at times at wits end with each other because sometimes neither respects the opinion of the other. Travis laughed and said, “I can tell you a whole lot about roosterfish, but to be honest I have never caught one. 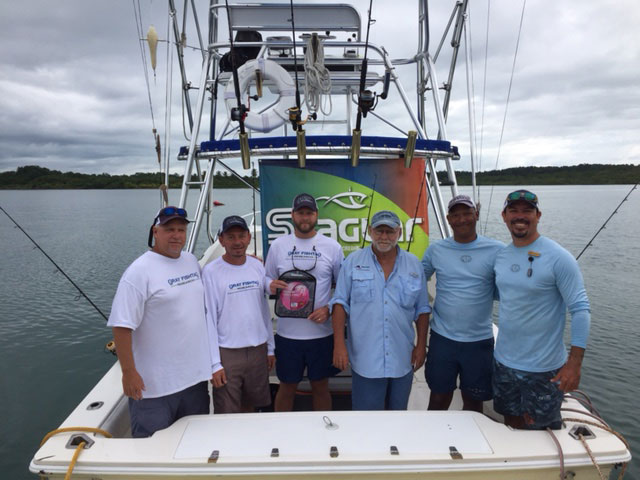 About that time Bolanos’s rod twitched and then slammed down towards the water and line screamed of the reel. After a 20-minute balancing act he had a 35 lb roosterfish on the surface. Travis jumped into action, made an incision in the fish’s belly and had the tag inserted and stitched up in less than two minutes while running water over the fishes gills. The rooster took off like he had a firecracker under his butt when placed back in the water. Mission Accomplished!

We had heard some chatter on the radio about a school of tuna working a couple miles off the beach so we ran out. We found the dolphins and tuna but the tuna wasn’t interested in anything we had to offer. Then we made a unanimous decision. Let’s go back to the rock and see if we can get Travis a rooster. Back to the washing machine!

It took about thirty minutes but finally Travis was hooked into his first rooster. He got the fish to the boat a dozen times and each time it would peel off another 50 yards of line. Eventually he had the fish to the boat and it went an easy 50 lbs. That is like winning the lottery the first time you by a ticket. I think we made a fisherman out of Travis. I know one thing. My biologist friend knew a hell of a lot more about roosterfish than he did when the day started.

“I just wanted to personally thank you all on behalf of myself and the entire Gray Fish-Tag Research team.  Phase 2 of the roosterfish tagging study in the name of John DeVries was an incredible success.  Thanks to the continuous support from Crocodile Bay, the GFR team traveled to the Southern Pacific coast of Costa Rica and with the assistance of the Crocodile Bay Resort charter fleet and the top notch crews, we were able to deploy 2 electronic implantable tags in roosterfish.  This was the first time in history that implantable TDR tags have been deployed on Roosterfish.  Over the next months to years, valuable information on migration, habitat utilization, feeding behavior, and growth rates will all be gathered as those Roosterfish swim and go about their daily lives.  In the future, anglers will be able to thank Crocodile Bay for advancing our knowledge of highly sought after Roosterfish.

Thanks again for everything.